Summer lunch - my version of ratatouille

In New York we are quickly approaching that glorious part of summer when everything is local and everything is wonderful! Farmers' market stands are filling up with field tomatoes, and let's admit it, they just taste so much better than their hot-house cousins. There are now all manner of summer squash, all kinds of eggplant, peppers of all sizes and ranges from green to red, and incredibly fragrant basil. I stopped by the market on a recent rainy Thursday morning and came home laden with goodies. When Michael ask how I thought we'd possible eat all of this food, I had just one answer - ratatouille!

Ratatouille is one of my favorite foods and it is a delicious way to showcase all that summer produce. I don't like frying the vegetables or fussing around with complicated layering, but still crave that deep integrated flavor of vegetables that have been cooking together for a while. In this version that is my favorite so far I combined roasting the vegetables with cooking them in a sauce in the stovetop, making this relatively quick and not messy. I also added a generous drizzle of balsamic vinegar at the end, which is not traditional but really helps the dish shine. I find ratatouille tastes best at room temperature and keep well for a few days worth of lunch. Today I ate it with good local mozzarella and a whole-wheat focaccia the recipe for which I'll post in a few days. 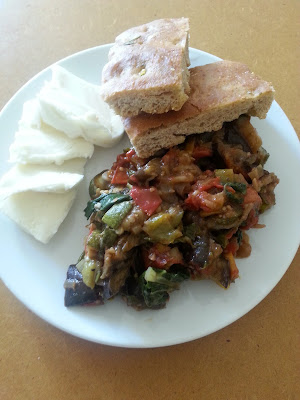 Pre-heat the oven to 450F, arrange racks in the top and lower thirds of the oven,  and have two larger rimmed baking sheets ready and oil lightly. Put eggplant in 1 layer on 1 half of the first sheet and the peppers on the other half, toss vegetables with a bit more oil and sprinkle with salt. Slide the sheet into the oven and let it get a head start on the other vegetables. Meanwhile, arrange the zucchini and fennel on the other sheet, oil a bit more and sprinkle with salt. Roast the vegetables until they start to brown but are not too soft. You will continue cooking them together on the stove top.

While the vegetables are roasting, get out a large deep pan and warm a couple of tablespoons of olive oil in it. Cook the onion over medium heat until it starts to brown, add garlic and the herbs except for basil and let cook for a couple more minutes. Add the tomatoes and some salt, stir, and let cook over low-medium heat uncovered until tomatoes start break down.

By now, the vegetables should be nearly done. Take out the eggplant and pepper tray and scrape the vegetables into the pan with tomato/onion mixture. Cover and let cook for 5 minutes over low heat. Take out the second tray and scrape zucchini and fennel into the pot. Cover and let cook for another 5 minutes. Over medium heat, add more salt if needed and up to 1/4 cup of balsamic vinegar. Stir a couple of times and let cook for a few minutes longer until the juices with vinegar thicken. Turn off the heat, stir in sliced basil and let cool for a bit until ready to serve. This can serve up to 6 people as a side dish or 1 me for a couple of days.