Some of you may know that magic happens when tomatoes are left to simmer with some good fat. It also seems clear that Italians really figured out this magic. This is evidenced by the Marcella Hazan's brilliant tomato-butter sauce and, as we discovered last weekend, by Amatriciana. Amatriciana uses the simplest of ingredients - pork fat from guanciale, good tomatoes, a slip of onion, maybe a bit of grated hard cheese, and transforms them into a rich, deeply satisfying, and savory sauce that we could not stop eating.
This version is adapted from the Silver Spoon cookbook, known as the Bible of Italian cooking. I know I am probably committing some sort of grave food sin by "adapting" the book's recipe, but we loved our version. Instead of guanciale, we used local jowl bacon, which gave our all'Amatriciana a touch of smokiness. I didn't have a fresh Fresno chile or red chile flakes, so we tossed in some Aleppo pepper. We added a single minced garlic clove. We used good canned tomatoes instead of fresh. Then we let is all simmer, while we enjoyed each other's company, snacked on salty cheese and honey (tip: Manchego + honey + bubbly = brilliant snack!), and had our patience abundantly rewarded. So go, make it next time you have an hour to kick around the house. I know that from here on I will be sure to keep jowl bacon in the freezer and canned tomatoes in the pantry, to make sure we have have Amatriciana any time we want. 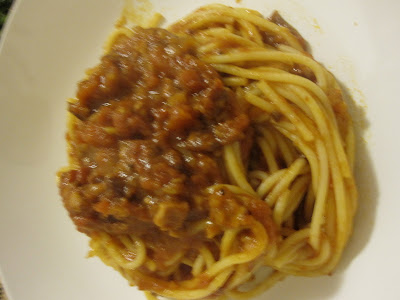 Spaghetti Amatriciana
Adapted from the Silver Spoon cookbook
Recipe says it serves 4, but the two of us finished it, although we were very hungry

In a large deep frying pan gently cook the bacon over low heat to render out the fat and crisp the bacon, which should take about 10 minutes. I like to start with a cold pan. This takes longer, but more of the fat runs out. You can also cover the pan with the lid to prevent the bacon pieces from burning. Add the onion and garlic, increase the heat to medium-low and cook, stirring occasionally for another 10 - 15 minutes until the onions are soft and lightly browned. Stir in tomatoes and Aleppo pepper, reduce the heat to low, cover and cook for at least 40 minutes. Add a splash of water if the sauce starts to thicken too much or crack the lid open if it is too watery. We like a slightly thicker sauce, which will get diluted a bit with the water clinging to the cooked spaghetti. Taste the finished sauce for salt and add a bit of salt and pepper, if needed. About 30 minutes before dinner, boil a large pot of water. Salt the boiling water well and cook the spaghetti until al dente. Transfer the spaghetti to the pan with the sauce and toss over medium heat for 2 - 3 minutes so that the pasta can absorb some of the sauce. I find the step really important in this dish. Serve with a bit of grated Parmesan, if desired.