Hello! Well, it has certainly been a while, hasn't it. Honestly, we have no exciting excuses for absence. Its not that we've been jetting off to exotic locales, although there was an afternoon in Istanbul and a quick stop by Bishkek between the two of us. We've been busy. While that does not mean we eat badly, it does mean that we eat late, which makes for terrible, terrible pictures. Personally, I (Madina), also get very cranky when hungry, so the last thing I want to do is to have to take a picture to share. But this ends now. I am resolved to not let hungry impatience get the best of me and to do a much better job with actually sharing our cooking efforts.

Ok, now that the apology is out of the way, let's get to the real reason we are all here - the eats. I was craving caramel ice cream last week, which led me to finding the perfect recipe in David Lebovitz's delightful book . It combines pears and caramel, delivering a bit of bitterness and a tiny bit of pear texture, which I happen to love. It was delicious, but not pear-y enough for me. 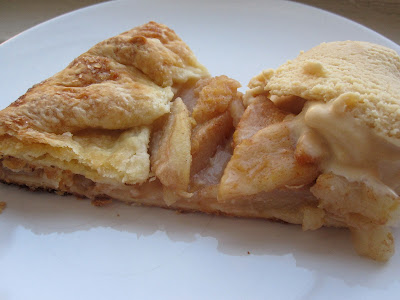 The search for a more pronounced pear flavor had me explore poached pears, but instead I decided to bake a galette. Simple, rich, and flaky dough borrowed from Smitten Kitchen surrounded the pears, which tasted like better version of themselves, cooked in rich juices and enhanced with cinnamon and lemon. The galette delivered the pear punch I wanted and was perfect with the caramel ice cream. Bonus tip - a bit of Cognac is really excellent with this desert. I wonder if this combination makes me sound like a Victorian maid? Maybe the Forsyte Saga is having its influence.

Dice the pears into small, even pieces.
Spread the sugar in a large, nonreactive saucepan and cook over medium heat, keeping a close eye on it. When the sugar begins to liquify and darken around the edges, gently stir it with a spatula towards the center. You will find that the edges will caramelize quicker than the center, so stirring helps keep the process even.
Once the sugar is deep amber, add in the pear pieces. Give the whole thing a stir. Do not worry if some of the caramel seizes and hardens; it will melt again soon enough. Cook over medium heat for 10 - 15 minutes until the pears are very soft and can be mashed with the back of a spoon.
Remove the pot from heat and stir in 1/2 cup of heavy cream, then add the rest of the cream, the salt, and the lemon juice. Stir well.
Let cook to room temperature. Transfer the mixture to a blender or a food processor and puree until smooth. I found that the mixture is too liquid for an immersion blender and makes a bit of a mess of one's stovetop. The original recipe calls for straining the pureed mixture, but I did not bother. I like the texture from the tiny bits of pear still floating around.
Chill the mixture thoroughly in the refrigerator, then churn per your ice cream maker instructions. Serve in generous scoops over warm pear galette or on its own.

In a medium bowl, cut the butter, sugar, and flour together with a pastry cutter, 2 table knives, or your fingers until butter is coated with flour and is in bits the size of peas. Mix the sour cream, lemon juice, and 1/4 cup ice water and drizzle the mixture onto the flour, all the while mixing with a fork. Remove large clumps of dough onto a lightly floured table surface. Add ice water, a teaspoon at a time to the remaining flour in the bowl until it holds together when squeezed in your hand. The dough should be more dry than wet. Dump the bowl content onto the table and knead it all together, until it comes into a somewhat cohesive ball. Flatten with the palm of your hand (this will make rolling easier later), wrap in plastic and chill in the refrigerator for at least 1 hour, but ideally overnight. You can also double this recipe, using 1 half for the pear galette and freezing the other for another day you crave flaky richness.

For the filling:
4 medium-large Bosc pears, peeled and cored. I find that Bosc pears keep their shape well during baking
1 tablespoon lemon juice, from about 1/3 lemon
Zest of 1/2 lemon
2 - 3 tablespoons sugar, depending on the sweetness of your pears
1 teaspoon ground cinnamon
2 tablespoons turbinado sugar for sprinkling, optional but really nice

Preheat the oven to 375 degrees, set the rack in the middle, line a baking sheet with parchment paper or a silicon pad.
Cut the pears in half and the slice each half, lengthwise into 8 - 10 slices. Mix the remaining ingredients in a medium bowl. Gently toss the slices pears with the lemon/sugar/cinnamon mixture and let stand while you roll out the dough.
Take the dough out of the refrigerator and roll out, on a well-floured surface until about 12 inches in diameter. Put the dough in the middle of the baking sheet. Mound the filling in the middle of the dough, leaving about a 2-inch border. Fold the border over the filling decoratively, if you would like and sprinkle the border with turbinado sugar. Slide the baking sheet into the hot oven and bake 35 - 45 minutes, until the juices are bubbling and the galette is nicely browned. Let cool to room temperature before serving.
Posted by The 2 Sisters at 10:48 PM