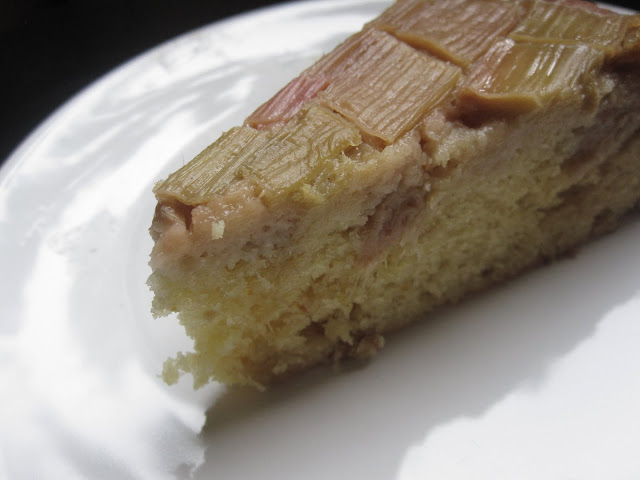 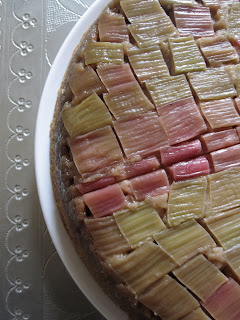 I love rhubarb not only because it offers a lovely tangy counterpoint to simple sweetness, delivers a pretty pink, but also because it indicates that spring is finally here.  A humble vegetable, classified as a fruit (I guess an opposite of a tomato), rhubarb's appearance at farmers' stands means that its time for asparagus, spring peas, with strawberries not far behind.  Spring being my favorite time of the year, I appreciate rhubarb's signal.
While rhubarb pie is a classic, I was in no mood to start pie dough at 10pm on a Sunday.  I was craving a cake with soft crumb that would let the rhubarb flavor come through, not too sweet for a Monday morning  breakfast treat at work, but indulgent enough to have with an afternoon tea.  The Gourmet recipe was just about perfect, but I reduced the sugar in the topping to 1/2 cup,  replace anise with orange zest, and forgot to add the 1/4 cup of milk with no evidence of harm.  My version is below with the link to the original.  The batter comes together in a no time and you don't have to lay out the rhubarb cubes as obsessively as I did.  Also, baking this in a cast iron skillet reduces clean up.  If you don't have an oven proof skillet of the right size, just melt the butter and the brown sugar on the stove top and then pour it into the cake pan.

Make cake:
Into a bowl sift together flour, baking powder, baking soda, and salt. In another bowl with an electric mixer beat together butter and sugar until light and fluffy and beat in vanilla and orange zest. Add eggs 1 at a time, beating well after each addition. With mixer on low speed add flour mixture alternately in batches with buttermilk, beginning and ending with flour mixture and beating until just combined (do not overbeat).| Spoon batter over rhubarb in skillet, spreading evenly (be careful not to disturb rhubarb), and bake cake in middle of oven until golden, about 45 minutes, or until a tester comes out clean. Cool cake in skillet on a rack 15 minutes.

Run a thin knife around edge of skillet and invert a plate over skillet. Keeping plate and skillet firmly pressed together, invert cake onto plate. Carefully remove skillet and serve cake warm or at room temperature. Feel free to share with colleagues.
Posted by The 2 Sisters at 10:31 PM