There are two issues with challah that despite all of my attempts I could not resolve for a while. The recipe yields 2 large bread loafs and despite the fact that I always give some of it away, I still end up with at least ½ extra loaf. Challah also does not age or freeze well. The bread dries out just in couple days and becomes too chewy when frozen.
Today morning, when flipping through an old issue of Food&Wine, I spotted a recipe for a rhubarb bread pudding… then I lifted my gaze and say half a loaf of stale challah. My mind and stomach started working. First, there are very few fruits still available at the market. Apples would be great, but I am a bit tired from apple desserts after the holiday season, so I went with the second option- pears. Then, my craving for chocolate and a hint of sweet tanginess, in this case golden raisins, kicked in. Brandy came last to adding depth and woodiness to this rich dessert that solve this issue of stale challah. 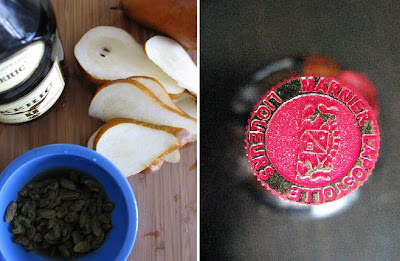 
Pre-heat the oven to 375F. Set aside a cake pan that fits into a larger skillet for the water bath.
Arrange challah cubes in one layer and bake for 10-12 minutes until the bread is slightly toasted. Move the bread into a large bowl. Keep the oven on.
Run raisins under hot water until soft. Place raisins a small bowl with brandy.
Whisk agave, eggs, half&half, salt, chocolate, and raisins. Gently fold in the mixture making sure all pieces of bread are covered . Soak for 15 minutes.

Meanwhile, place the skillet over moderate heat. Sprinkle sugar on the skillet and add pears. Caramelize pears for 2-3 minutes on each side. Pour brandy from soaked raisins over the pears and cook until brandy is completely evaporated. Turn off the heat.
Move pears to the cake pan arranging them in a single payer.
Instead of trying to scrape of the caramel from the bottom of the skillet, fill up the pan half-way with water. 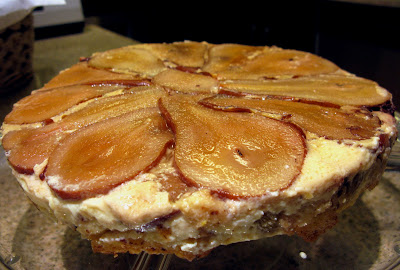 Spoon the bread mixture and any remaining liquid over the pears. Place the cake pan into the skilled filled with water. Bake for 1 hour.
Remove the cake pan from the water
bath and place on a wire rack to cool.
*if you want to get the tart-like design as shown below, line the pears evenly on the bottom of the cake pan. When the pudding is cool, run a spatula around the edge of the pan and invert the pudding carefully.
Posted by The 2 Sisters at 3:12 PM